Since the last update the Society the project has been incredibly busy with the biggest news being the locomotive has arrived at her new home on the Swindon and Cricklade Railway. The move which took 2 days and involved a crane, 2 low loaders and around 30 volunteers was a complete success with the locomotive arriving at the railway on the 20th April.  The Society would like to thank Reid freight and all the volunteers at Sellindge and Swindon for their help during the move. The Society is also incredibly grateful to all our members who donated towards the costs of the move and raised £1,700 in just under a week. You can still support our efforts to cover the move by donating at https://www.justgiving.com/crowdfunding/35011gsn.

General Steam Navigations move to the Swindon generated quite a bit of main stream media coverage for the project. The stand out achievement was a 3 minute feature on the local BBC 6pm news program ’Points West’. The feature included footage of the locomotive arriving, some old photos, interviews with Andrew Collett one of our trustees and Allan Bott one of the Swindon and Cricklade volunteers. Getting the feature was a great scoop for the project as the program gets an average of 580,000 people tuning in.

Andrew Collett and Allan Bott were also interviewed for BBC Radio Wiltshire’s  Drivetime program. General Steam Navigation also made the front page of the S&CRs local paper the ’Swindon Advertiser’. All this mainstream coverage is a great success for the project and our new hosts as we look to build our volunteer and supporters base in the local area. 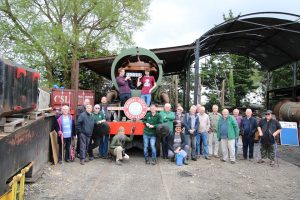 The Society held its AGM on the 18th May at Blunsdon station on the Swindon and Cricklade Railway. This year’s event was the first time the Society has been able to hold the AGM with the locomotive present and was the majority of our members’ first time seeing 35011 in person. A full write up will appear in Issue 10 of the Packet out in the next couple of months.

If you are considering getting involved with the restoration of the locomotive joining today is the perfect opportunity to join. Working parties will be starting soon at the Swindon site and will make the next stage of her life and you could be part of that new chapter. For more details please do get in touch with us through our website or various social media platforms.