35011 sets course for the Swindon and Cricklade Railway

The General Steam Navigation Locomotive Restoration Society are pleased to announce that they have agreed terms to move locomotive 35011 to the Swindon and Cricklade Railway in Wiltshire.

The Society restoring Merchant Navy class locomotive 35011 General Steam Navigation are working to retro convert the locomotive to its 1950s specification before the class were rebuilt into the more conventional form by British Railways. This includes restoring the iconic air smoothed casing along with Bulleid’s oil bath encased valve gear incorporating chain drive. Once complete, General Steam Navigation will be the first engine to be restored to as-built condition within the ranks of preserved Merchant Navy class locomotives.

By relocating the group and the locomotive to a publicly accessible site near Swindon, restoration will be able to step up a gear, with a target to complete the rolling chassis within the next five years. The Swindon and Cricklade’s Blunsdon station will become the new home for 35011.

The General Steam Navigation Locomotive Restoration Society was formed towards the end of 2015 with the aim of restoring 35011. The Society has made great advances since then, but volunteers were keen to find a permanent restoration  base for the locomotive.

“We are delighted that we can finally announce that the locomotive will be moving to The Swindon and Cricklade Railway in the near future” said Simon Shutt, Chairman of the General Steam Navigation Locomotive Restoration Society. “This move will enable us to take the project to the next step and escalate our efforts to put the steam back into General Steam Navigation.”

Working in association with other locomotive groups based at The Swindon and Cricklade Railway, the plan is to remove the locomotive boiler for the first time since it was withdrawn by British Railways, to allow thorough restoration of the locomotive frames and wheel sets.

The cost of the move has been priced up just under £9,000 which is where we need your help. We are fundraising to help cover as much as the cost as possible with the target being set at £4,000, the more money the Society can raise the more money that can be spent on components and help restore this mighty beast. If you can donate please consider supporting  the Society by visiting our Just Giving page below thank you.

The General Steam Navigation Locomotive Restoration Society are delighted to report that on Wednesday 13th March the Society will be announcing the new base that the locomotive will be moving to. The new base will see the restoration and eventful running of the Society’s Merchant Navy class engine.

Issue 9 of the Packet which will be posted to members in the coming days will feature an indepth article on the new base and the exciting times that lay ahead for the project. 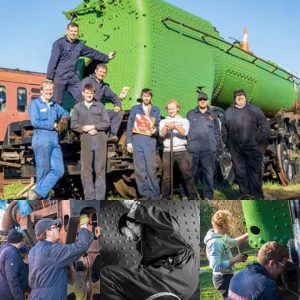 Feburary was a busy month for the projects engineering team with volunteers working on the locomotive at Sellindge to prepare her for the upcoming move.  We do have to inform our supporters that unfortunately we won’t be publicizing any dates for the physical move of the locomotive due to space requirements at both ends of the trip. 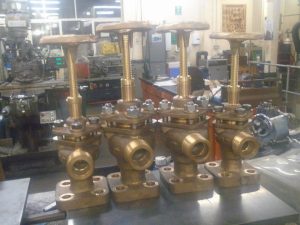 Ian Ferguson one of our expert machinists completed the work on the Klinger valves and have been collected by one of the Societys trustees. We’d like to thank Ian for all his hard work on the valves and the Society plan to fit them to the manifold during the AGM to display to our members, 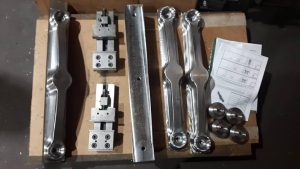 Work on the bogie spring beams was progressing with the profiles being machined for us by Asbrook Engineering in Devon.  These beams are being made the same way as the beams for the trailing truck and should be delivered by the end of March.