Looking back to progress in 2019

Since the move of General Steam Navigation our new home at the Swindon and Cricklade Railway   in April 2019 we have held a number of enjoyable and productive working parties made all the more effective by being at our new permanent base, see also our May 2019 update here.

Working alongside our friends at the Swindon and Cricklade Railway   we have obtained and installed a new 20ft storage container alongside 35011 in the Barn at Blunsdon. This gives us a secure base for our tools, equipment and most importantly storage of many of the components that have been removed from the locomotive to enable the next steps of restoration to take place. 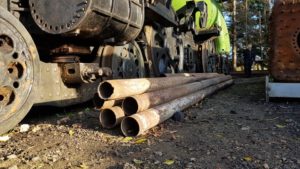 In preparation of lifting the boiler during 2020 we have continued to remove the boiler tubes, with the majority of the large tubes now removed. We also removed the top of the old smokebox, this being both badly corroded and also a of a rebuilt type and therefore not suitable for 35011 when restored to original form, this have given us easier and safer access to the boiler front tubeplate. All the boiler mounting points have been regularly oiled up to enable easier removal of the boiler later this year.

As with a restoration of this kind there are many components that need to be removed from the locomotive as part of the process, some of these items will be restored and reused whilst others being for the engine in her rebuilt form will not be required and where possible a offered to other locomotive owners. All the components so far removed have been catalogued and securely stored. These items have included: slide bars, reverser, cylinder and valve chest covers, glands and packing and brake gear.

We also have continued to work on the production of new items including a wide range of new castings, Klinger valves and bogie and pony truck spring beams and hangers being machined, and trial fitted.  Research and Design work and material sourcing is continuing in earnest for the new centre crank axle and new tyres have been ordered for the wheels for the centre axle. 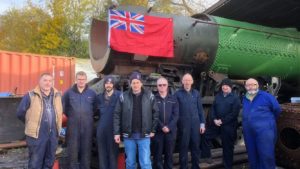 At our November working party that coincided with Remembrance Sunday, those attending marked the occasion by observing a 2 minutes silence, to remember specifically all those in the Merchant Navy whom lost their lives alongside our service personnel. 35011 was also suitably adorned with the Red Ensign flag of the Merchant Navy.

More details and information about the progress being made on 35011 General Steam Navigation will be in the next issue of our members magazine the Packet due later this month.

If you are not yet a member, it’s only £12 per year, you can sign up here  or even better become a shareholder here.

Our next planned working weekends are being held on 25th / 26th January & 29th and February / 1st March.

As always with our working weekends, no experience is necessary just enthusiasm and a willingness to get involved. If you are interested, please contact our chairman at andrew.collett@35011gsn.co.uk for a volunteer form to fill out.

Please note that as well as being a member of us you will also need to be a member of and or join the Swindon & Cricklade Railway.

Also our AGM will be held on the 28th March at the Swindon & Cricklade Railway,  where all members and shareholders are invited to join us. We have a guest speaker from Steam Railway Magazine and it is also a Gala Weekend on the Swindon & Cricklade Railway , so along with seeing the progress that has been made on No.11 there will be plenty going on to make the visit worthwhile.
The formal AGM notice will be in the next issue of the members magazine the Packet.