#OnThisDay in 1955 General Steam Navigation entered the Eastleigh works for a heavy intermediate overhaul. It was during these works when her cast trailing truck she was built was changed for the fabricated design she still has. The fabricated design was fitted to the final ten Merchant Navy’s with the first being 35021 New Zealand Line with 35011s being the last remaining example with all fellow surviving Merchant Navy’s having the earlier cast design. The General Steam Navigation Locomotive Restoration Society aims to restore this unique component in 2021. 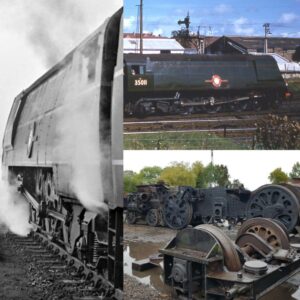 This is your chance to be part of an exclusive club and aid the overall restoration of General Steam Navigation by becoming a Trailing Truck Transformer.

The Trailing Truck was removed from the frames at the same time as the successful boiler lift on 2nd October. The estimate for the full refurbishment and overhaul of the Trailing Truck by specialist contractors is £15,000.

We are offering a maximum of 30 members the opportunity to purchase a ‘Lot’ for £500. Members are welcome to purchase as many ‘Lots’ as they wish up to the maximum target amount.

Members of the Fund Group would receive a number of benefits including:

With the trailing truck now removed from GSN, we have undertaken an assessment of the work that will be required to restore it to mainline running standards. This will involve a full strip down to allow us to understand the condition of the frame metal work, which is likely to require non-destructive testing to determine the soundness of the existing material.

The axle will also require removing, but depending on which contractors we decide to use for the overall work we may need to remove this at Blunsdon to enable it to be sent separately for repair with the wheels being re-profiled; whilst the axle bearings will also need assessing and possibly refurbishing.

The frames will also require sandblasting to remove all the old flaking material and paint, with the corroded sections of the framework and rear platform being cut out and replaced with new material. Finally the framework, axle and wheels will need to be primed, undercoated and painted prior to being re-assembled.

We understand that £500 is a lot of money and for people who wish to support the trailing truck but are unable to join the Trailing Truck Transformers club you can help us by donating to our Wheel Set appeal on our JustGiving page here.

Any and all donations would be gratefully appreciated.