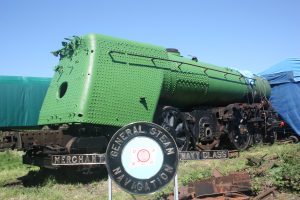 November has been another productive month for the project with lots of work being carried out behind the scenes which should take the GSN project to the next level. We are quickly approaching our 3rd birthday and the Society is hopeful of announcing a new restoration base that we are currently in negotiations with. Should this be agreed and the deal signed the Society will launch an appeal to raise the approximately £7,000 required for the transportation costs and crane hire fees to move the J94 chassis and its boiler that‘s currently in front of 35011 at Sellindge. This could also see our AGM being delayed by a couple of months this year in order to have the event at the new base with the locomotive present. As soon as anything is agreed be assured our members will be the first to know.

The General Steam Navigation is delighted to announce the long term loan of some original Bulleid components to be used on 35011. Kindly lent to us by Eddie Wearing the components include a Smiths Speedometer that was removed from a Bulleid Pacific and 4 electric lamps. The Smiths Speedometer‘s were installed on all of the LNER‘s top link engines, the Bulleid Pacific’s and the BR Standard Class Locomotives such as the Britannia’s. This makes them a very sort after component item within the heritage railway sector as the supply of originals dries up so securing one for the locomotive is a great achievement. Before use the Speedometer will need to be sent to a specialist company such as Wayne Jones and Partners for overhaul, calibration and certification.

Last month we mentioned with with Christmas fast approaching it was the perfect time to join easyfundraising.org.uk. We were delighted to see several new supporters sign up which has led to an immediate increase in donations.  Easy Fundraising is a great way to raise money for charities, schools, sports clubs, community groups, Merchant Navy class steam locomotives, and other good causes just by shopping online and selecting your chosen charity, in our case General Steam Navigation.