#OnThisDay in 1959, General Steam Navigation re-entered service after rebuilding from it’s original form, which we are working to reverse. Attached to it was boiler 1097, one of the ten North British Boilers (of which 3 survive), and had seen service previously with Union Castle, Shaw Savill, and East Asiatic Company. It was kept with General Steam Navigation until withdrawal, and is now in our possession. Before we took ownership, the superheater header and elements were removed, we have since removed all the large tubes and the majority of the small tubes from the boiler, as well as the ash pans from the firebox. The boiler was lifted from the frames in October 2020, since when we have started on cleaning the inside of the boiler and firebox, prepping them for inspection later this year. 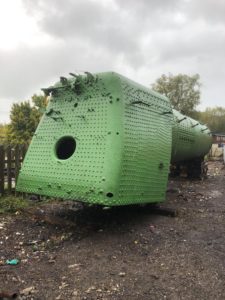 The original boiler fitted to General Steam Navigation, 1100, was the first Bulleid pacific boiler manufactured at Eastleigh. After removal from General Steam Navigation in 1947, it was used on Nederland Line, British India Line,, Peninsular & Oriental S.N. Co, French Line C.G.T, and Bibby Line. Unfortunately the first Merchant Navy boiler manufactured at Eastleigh was the only Merchant Navy boiler scrapped there, in 1965.
The Trailing Truck Transformers funding group continues to be our primary fundraising campaign with its objective of funding the restoration of GSNs trailing truck. The Society is pleased with the initial number of members who have signed up for blocks but are under no illusions that its still along way from being funded. We are offering a maximum of 30 members the opportunity to purchase a ‘Lot’ for £500. Members are welcome to purchase as many ‘Lots’ as they wish up to the maximum target amount.
Members of the Fund Group would receive a number of benefits including:
For details on how to become a Trailing Truck Transformer please click here.
Thank you