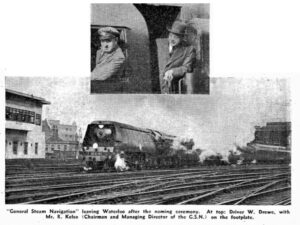 #OnThisDay in 1945 General Steam Navigation was officially named at a ceremony at Waterloo station. The ceremony that took place at platform 10 was a short affair with the usual pomp and circumstance associated of the naming of a top link engine being trimmed back due to the wartime conditions. The ceremony was attended by various directors of both the Southern Railway and General Steam Navigation Co Ltd and in addition as a special tribute to the shop staff of Eastleigh who built the engine were six representatives to see there “baby” christened.

“Between your Company and ours, Mr Kelso, there is a long standing friendship, hallowed by service together in war and peace. The nameplate on this engine is a token of that friendship, and we look forward with confidence to the day when this war is won and your houseflags in ever increasing numbers enter and leave our docks.”
Col. Eric Gore Browne, the Chairman of the Southern Railway addressed these words to Mr Robert Kelso, the Chairman and Managing Director of the company whose name will be henceforth be seen on the nameplate 21C11 – General Steam Navigation.
After a quick footplate ride for Mr Kelso General Steam Navigation returned to Waterloo to get on with the serious work of doing its part to help win the war and hauled the 12:50pm West of England service out of the capital. 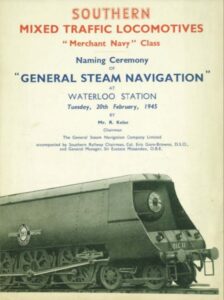 You can help us restore GSN by joining the General Steam Navigation Locomotive Restoration Society Membership. Membership costs £12 for the year with members being kept up to date with the latest achievements, via our members magazine ‘The Packet’ published three times a year with progress reports on GSN and articles about Merchant Navy’s and the light pacific’s, access to the locomotive when possible and the ability to get involved with the society. You can find out more by clicking this link.
https://35011gsn.co.uk/membership.html